Arguably the most revolutionary American architect of the past century was Frank Lloyd Wright. Eschewing both the classical school of design as well as the functional modern movement founded by European architects, Wright helped conceive a new architectural style. He strived to create harmony between his buildings and their natural surroundings, a philosophy the literati of his day dubbed Organic Architecture.

No Wright building expresses this concept better than Falling Water.  Rather than heed his client’s preference to site the home within view of a large waterfall along Bear Run, Wright famously defied both his client and conventional architectural wisdom, and placed the home atop the creek, cantilevered above the waterfall.  This gesture created an iconic representation of Organic Architecture, as the building form ultimately is emblematic of the exposed ledges of sedimentary rock on the site itself.  The modern school’s mantra “form follows function” was discarded in favor of “form follows site.” 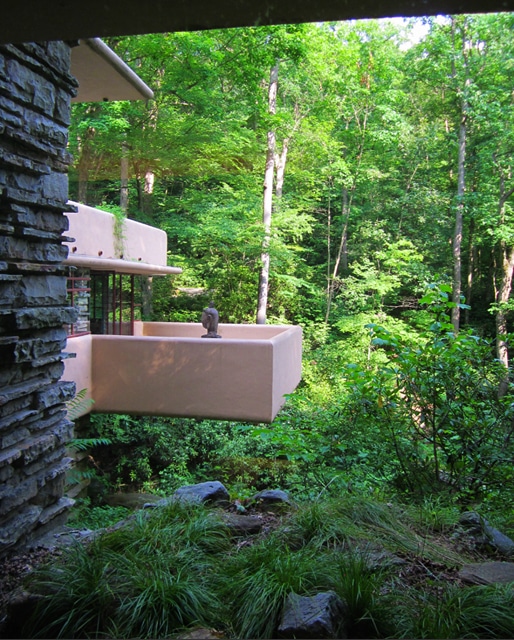 Each indoor space has its adjacent outdoor space.

To an architect, Falling Water is perhaps almost spiritual.  It is engrained into students as a hallowed temple of design.  There is a flip side to this coin though.  A friend of mine who also happens to be an architect was discussing this with me recently, and likened Falling Water to Led Zeppelin.  Zeppelin was great.  They were innovative.  Big.  Sexy.  Irreverent.  But how many times can you really listen to “Whole Lotta Love” and still find it moving?  Haven’t we all had our Zeppelin Phase, and then moved on?  Familiarity propagates our understanding.  Been there, done that.

I recently had the opportunity to visit this shrine of architecture, and Wright’s genius is readily evident.  Every major interior room is accompanied by an adjacent outdoor terrace of equivalent or larger size, to fully engage the user with the outdoors.  Frameless window glazing blurs the line between interior and exterior.  Stone coursing is deliberately extruded from the face of the building to recall the exposed geology of the site.  Casework shelving is cantilevered out, unsupported from below, an obvious reference to the cantilevered building. 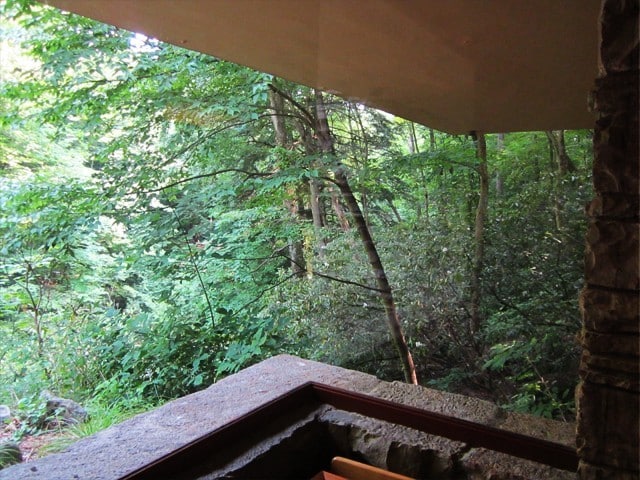 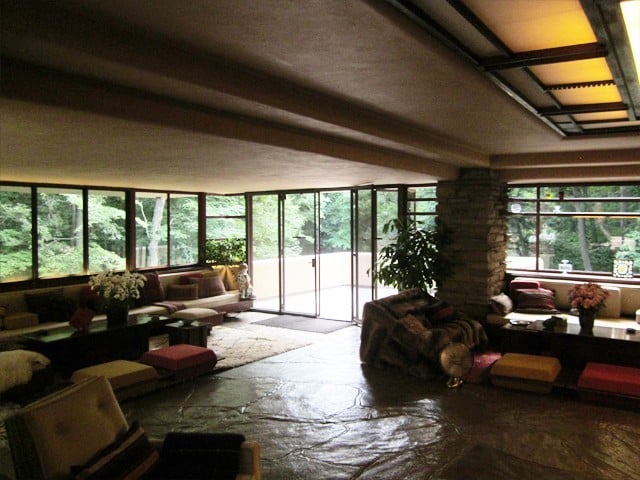 However, it is also a challenging building to evaluate. Interiors are characterized by Wright’s penchant for low ceiling heights. Deliberately constrained hallways inhibit natural flow between spaces. The Wright-designed furnishings have an almost diminutive quality within the context of the larger rooms. Even though rooms are large, there remains an underlying feeling of claustrophobia.

Yet, there is something about the experiential nature of actually being there which defies comparison. Conspicuous brilliance is everywhere, even if at times it is difficult to appreciate.

Maybe, you just have to be there…as people, perhaps we only fully understand a space completely if we inhabit it. Maybe, if I had seen a Zeppelin show live, I’d feel differently about them now too.